To read without reflecting is like eating without digesting.
– Kenneth Burke

In college, you will probably be expected to write a paper in response to another text often referred to as a Response Essay. The text could be in the form of a newspaper or magazine article, a government or business report, a book, or even visual texts, such as magazine advertisements. (For our purposes here, we will not be covering responses of literary texts.)

Instructors often assign response essays to not only encourage a deep reading of a text, but also empower students to form critical opinions of their own in response to others’ opinions. Responding to texts requires students to carefully consider how they feel about often controversial issues, perhaps issues students have never considered before. Often, the outcome for students of writing response essays can be a new understanding and appreciation – even a passion – for a topic.

The first step is the obvious – read the text carefully. But this step is often glossed over too rapidly. It’s not enough to read through a text once; read it enough times that you thoroughly understand the topic, the writer’s opinions, the main ideas, the minor details, and can articulate them without re-reading the text. This may take several reads before you fully understand the entirety of the text.

Annotating what the paragraph is saying is to simply summarize briefly the main idea in each paragraph. This helps you to retain the information and aids you in finding key points. Annotating what a paragraph is doing is to take note of what the author’s intention is. Does the writer argue a main point? Does the author prove his point with facts or statistics or other evidence? Does the paragraph cite background and history? Notice that when you annotate what your paragraphs “does,” you’ll use verbs to show action. This will demonstrate what rhetorical strategies the author is using to build his or her argument, and will play a key role in how you analyze the text.

Once you’ve done a thorough read-through and annotated the paragraphs, it’s a good idea to read again and highlight the details. You might use a color marker to highlight the major details of the paragraph, and then use a different color marker to highlight the minor supporting details. Although this sounds easy, this step is where students often fail. It is imperative to be able to identify the key major details that are moving the argument forward, and differentiate them from the minor details that only offer supporting evidence.

Now that you have read through the text a few times, you might be thinking about some inconsistencies, contradictions, or lapses in information. This is the time to jot down questions you might have. Are you finding holes in the writer’s argument? Does the writer fail to fully communicate the full scope of the problem, or fall short of explaining other key points? Do you feel the writer is fair and unbiased, or leaning heavily toward one side without giving voice to the opposition? Does anything surprise or puzzle you?

What do YOU Think?

The objective of a Response assignment is to respond, so you’ll be asked to communicate what your opinions are. As you carefully consider your response to the text and author, think about how you feel about the text.

Once you have a clear idea what you think about what you’ve read, now it’s time to put it all together.

If you’ve followed all of these steps to prepare your response, congratulations! If you’ve taken careful notes, annotated the text thoroughly, and have an informed opinion, you may find you have the skeleton of your response paper written.

Putting it all Together

Begin the paper by introducing the author and title of the text, as in the following example:

In Victor Frisk’s article, “No Way Out,” the author states that the US should detain all travelers coming into the country from destinations that have been proved to have Ebola cases within the last year.

The following sentences in the intro should briefly summarize the text. This should be a very brief summary of what you read. It’s not unusual for instructors to ask you to skip the summary, so follow your guidelines carefully.

The final sentence in the intro will state your thesis, a concise focused opinion of where you stand. Do you agree or disagree with the author’s premise?

There are several ways to organize the body of a response. Most instructors ask students to include textual evidence in the body. You might do this by inserting an author quote, contextualizing the quote, then commenting on the quote with your response. Regardless of how you organize it, the body paragraphs should contain only one idea each, and connect back to your thesis. What you include in the body will be determined by your assignment guidelines, but remember to  always relate back to the thesis as you go.

The conclusion is a restatement of your thesis and how it fits with the original text’s argument. Reinforce your thesis, but avoid restating it word for word. You might leave the reader with a thoughtful comment or question to consider, or a prediction of future consequences or outcomes. Avoid inserting new information or quotes in the conclusion.

Response essays pose special challenges for students, but with several close readings and careful note taking, you’ll be well on your way to a successful paper. 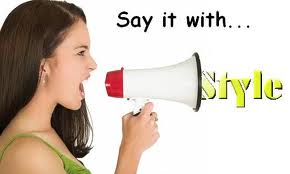 Describing good style in writing is one of those things that is hard to explain. Like fashion sense or a winning personality, either you have it or you don’t. But you can learn how to improve your sentence style by following a few easy steps.

The words below are examples of vague nouns. Relying on vague nouns often leads to wordy construction, so it’s always best to avoid them if you can:

Vague: Consumer demand is rising in the area of services.

Vague: Strong reading skills are an important factor in students’ success in college.

Precise: Students’ success in college depends on their reading skills.

Vague: Photography took on new aspects during the Civil War.

As you can see in the examples above, the sentences become wordy and confusing when vague nouns are used. This often can impede rhythm in sentences, which hurts the flow. This means that the reader must slow down to read the sentence, which isn’t necessarily a good thing.

If you’ve ever felt your essay plodding along in a repetitive “subject/verb/object” order, you probably could use some absolute phrases to enliven your rhythm and sharpen your style.

Her arms folded across her chest, Professor Smith warned the students not to text in class.

In the sentence above, the absolute phrase is at the beginning of the sentence – Her arms folded across her chest.

The clause, Professor Smith warned the students not to text in class, is an independent clause, which means it can stand alone as a sentence. The absolute phrase (a dependent clause) is modifying this entire clause.

Absolute phrases can be arranged in different positions in a sentence. In the example above, the absolute could be placed after the independent clause:

Professor Smith warned the students not to text in class, her arms folded across her chest.

Absolute phrases can also be placed in the middle of a sentence, between the subject and verb:

Note that the absolute phrase is set off in the sentence with a pair of commas.

Do you ever get your essays back from instructors with such comments as, “tighten,” “condense,” or “wordy”? What this means is that you are trying to communicate your point with more words than necessary. For example, note the difference in

“It is the opinion of our professor that we have failed to meet his expectations.”

“We have failed to meet our professor’s expectations.”

The second sentence is tighter, uses fewer words, and is stronger and more direct. Just remember, if you can communicate your point in fewer words, do it. Less is more.

Consider the following redundancies in italics:

It is absolutely essential that all students meet with their advisor on a regular basis.

If something is “essential,” can it be any more essential with “absolutely” in front of it? Probably not.

The advance preview of Transformers scored big at the box office.

You might have seen this one in film reviews, or even on E TV. If a movie is a preview, doesn’t that mean it is in advance of the release?

In my personal opinion, everyone could benefit from eating more chocolate.

Everyone, at one time or another, has at least said this, if not written it. So what is wrong with this example? If it is your opinion, isn’t it personal?

The final outcome of the Literature exam was better than I expected.

The outcome of something is always final, right?

These are all examples of redundant words that create inflated sentences. Carefully edit your final drafts to make sure you’re not redundant.

To correct, make the “doer” of the action the sentence’s subject, as in the example below:

Wrong: Having arrived late for practice, a written excuse was needed.

Who arrived late? This sentence says that the written excuse arrived late. The possible revision might look like this:

Correct: Having arrived late for practice, the team captain needed a written excuse.

The main clause now names the person (the captain) who did the action in the modifying phrase (arrived late).

Choosing the best words to express your ideas in the best possible way sounds easy, but often is more difficult than we think. Improving your writing style may take some time and effort, but by following a few simple rules, your writing will become more readable and your style will be the envy of your peers!