All college students, sooner or later, will be required to write an academic paper. Your instructor will hand out an assignment sheet, and one of the requirements will say something like, “Follow MLA format.” What exactly is MLA format, you ask?

MLA stands for “Modern Language Association.” MLA style, according to MLA Handbook for Writers of Research Papers,  “represents a consensus among teachers, scholars, and librarians in the fields of language and literature on the conventions for documenting research, and those conventions will help you organize your research paper coherently” (xiii). The parenthetical reference you just read following the direct quote is referred to as an in-text citation, which is the page in the aforementioned text where you can find the quote. MLA citation style is generally used in the humanities and liberal arts fields.

According to the editors of the MLA Handbook, MLA published a style sheet in 1951, and since then has been refining the style to help academics and researchers compose their writings and research (xiv). Note that even though the previous sentence is not a direct quote, but paraphrased, it still includes a parenthetical citation. Credit must be given to ALL information taken from any source, or the writer could be accused of plagiarism.

As you compose your research paper, you’ll be asked to include research on your topic. Research might take the form of print sources, such as books, journals, newspapers, or magazines. You may also want to utilize online or web sources, such as an organization’s website, an online magazine or newspaper, or even Wikipedia. If you are not sure what types of research are permitted, ask your instructor.

A research paper will have two types of sources – primary and secondary. Primary sources are original information from an author who has experienced or witnessed what he or she is writing about. They might include original documents or artifacts. The Diary of Anne Frank would be considered a primary source, as it was written by Anne Frank, who experienced the events.

Secondary sources usually analyze and interprets primary sources.  Secondary sources are not original, and are often several steps removed from the event. A journal article that analyzes someone else’s research is an example of a secondary source. Learning how to locate, analyze, and integrate secondary sources into your writing is one of the most important skills you will learn as you write your research paper. You will need to not only learn how to assess other’s research, but you also must articulate your own ideas clearly.

EX.: Human beings have been described by Kenneth Burke as “symbol-using animals” (3).
Since the author’s name is mentioned in the text, only the page number is given.
Human beings have been described as “symbol-using animals” (Burke 3).
In this example, the author’s name is given in the citation, as it is not mentioned in the text.
Many other sources, though, may not list an author, and most web-based sources list no page number. Refer to the current  MLA Handbook or Purdue Owl for information on different types of citations when lacking an author, page number, or both.
Works Cited
The works cited page is the reference page to your paper. It will alphabetically list every source you used in your paper, both primary and secondary. Your instructor will look at each entry on your works cited, then locate that entry in your paper’s citations. This means that whatever means you have used to list your entry, either the author, title, website, etc., should match the way you have cited it in the text of your essay. MLA requires specific formatting, so always refer to your handbook or visit Purdue Owl to check your entries.
Never Guess
Learning how to locate, analyze, and integrate research into your compositions can be time-consuming and often confusing. You should never guess how to cite a source. Refer to the MLA Handbook or visit Purdue Owl online for any questions you may have on in-text citations or your works cited page. 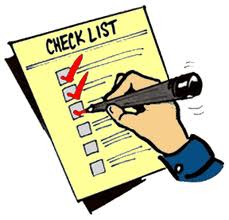 You’ve worked hard all quarter getting your essay in top form. You’ve outlined. You’ve taken pages of notes. You’ve peer-workshopped. Your instructor has given you feedback – and at least 100 handouts. You revised. And revised. And revised. Today the final draft is due – but is it really done?

Don’t be too quick to hand your essay over just yet. Here are a few last-minute editing tips to get your essay as perfect as it can be.

1. Did you use spell-checker? Good. But don’t trust it. Spell-checker is great if you have misspelled a word or used incorrect punctuation (sometimes). But spell-checker doesn’t work if you’ve used defiantly instead of definitely, or their instead of there, or a semi-colon instead of a colon, or – you get the picture. One quick way to find these errors is to go to the toolbar under “Edit”; click “Find,” then type in the words you have difficulty with. It will highlight them so you can confirm you’ve used these words correctly.

3.  How is your sentence variety? Do you vary the length and style to create a nice rhythm, or are sentences short and choppy? Can short sentences be combined? Do you say the same thing but in five different ways? Sometimes we spend so much time on research or MLA as we’re composing our essays that we overlook something as simple as sentence variety that can be the difference between blah and the best essay evah!

5.  Do you feel like you know your essay by heart? Time to take a step back. If time allows, put the essay away for a day or two. Getting some distance from your essay will give you the opportunity to read it with a fresh set of eyes.

6.  Finally, let it go. You’ve done the best you can and there comes a time when we have to let our writing go and move on. If you know you’ve done your best to make your writing all it can be, then a grade often becomes secondary to that sense of accomplishment you’ll feel when it’s complete.

Students come into our Writing Center every day and ask what they can do to improve their writing NOW. Good writing takes time and practice (and lots of reading) but there are a few things you can do immediately to strengthen your writing and wow your instructor before that next essay is due.

1.     Eliminate wordiness. Do you ever get your essays back from instructors with such comments as, “tighten,” “condense,” or “wordy”? What this means is that you are trying to communicate your point with more words than necessary. For example, note the difference in

“It is the opinion of our professor that we have failed to meet his expectations.”

“We have failed to meet our professor’s expectations.”

The second sentence is tighter, uses fewer words, and is stronger and more direct. Just remember, if you can communicate your point in fewer words, do it. Less is more.

“That” is often just a filler word. Look back over an old essay and see how many times you’ve used “that” in a sentence. Would the sentence make sense without that “that.” The last sentence could, and I bet about 75% of yours could too. For instance, look at the following sentence; the first “that” isn’t necessary. The second is:

“I only meant that I didn’t want to write that essay.”
or

“The only way that I can explain my point is by showing an example.”

See what I mean? Cutting that word out will make your writing more concise. But I needed that last one, and this last one too, so make sure it’s not necessary to communicate meaning.

3.     Be careful of piling on the prepositions. What’s a preposition, you ask? Space-related prepositions are anything a squirrel can do to a tree:

A squirrel can go around a tree
behind a tree.
in a tree.
on a tree.
toward a tree.
under a tree.
up a tree.

Once you get on a prepositional roll, it’s hard to stop:

I will stay with the best friend of my sister at the cabin near the river in the valley between the two most beautiful mountains in Wyoming until February despite the weather.

Sentences can go on forever with prepositional phrases, and that isn’t a good thing (see how I needed “that” in the previous sentence?).

The hunters rested for a moment in front of the shack, their breaths white in the frosty air.

You can move the absolute phrase to the beginning of the sentence as well:

Their breaths white in the frosty air, the hunters rested for a moment in front of the shack.

Throw in some absolute phrases in your narrative essays to make them shine.

5.     Be active. Using active voice instead of passive voice in writing means the subject of the sentence performs the action expressed in the verb:

Sometimes passive voice is vague or awkward, and often the subject is left out. Politicians love using active voice and use it often:

Bombs were dropped (by who?).

Shots were fired (again, by who?).

Next time you read the paper, see how many times passive voice is used, and ask yourself if you are getting the whole story.

Try these 5 fool-proof techniques with your next assignment and share your results.

That was fun!  What did I leave out? Any others you want to share?